The World Map covers all the areas in the game. You can use it to navigate across long distances. 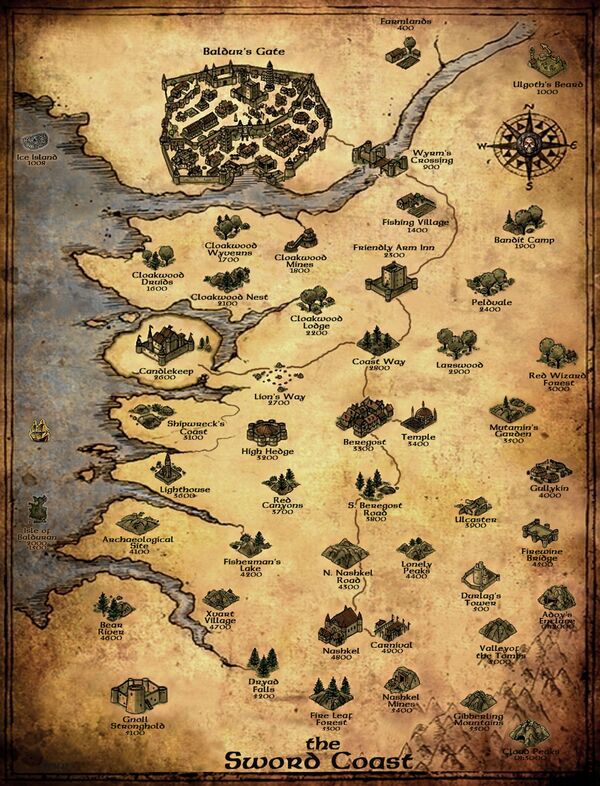 In Siege of Dragonspear, you only have access to certain maps related to the chapter you are currently in. 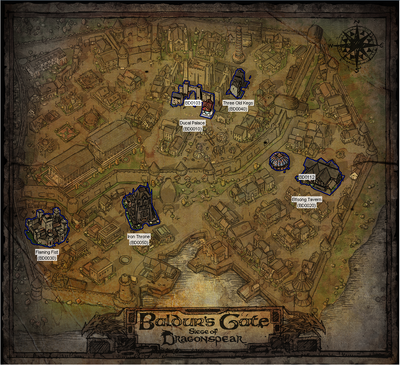 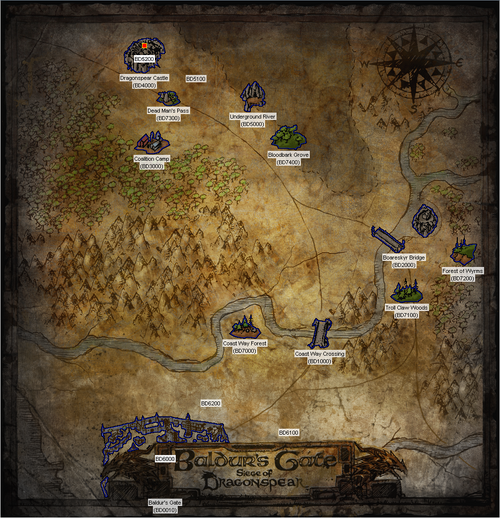 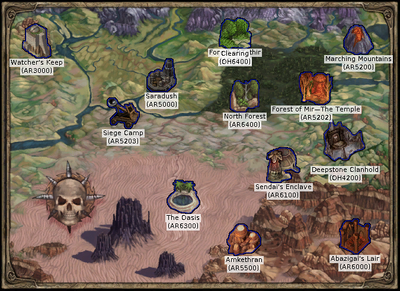 The developers gave all of these locations colorful names, but not all are visible in-game. With a few exceptions, such as the Cloakwood forests, the names below are either the displayed names, or an unequivocal description of their geographical location which aids navigation; the more evocative names are shown in their respective articles.

Canon is real life politics in the service of imaginary things that can be fun, and often makes them not; the Baldur's Gate game is surely not seen as canon by some Forgotten Realms players. It is a matter of dispute whether certain areas in the game belong to Western Heartlands or Amn. Some players are ambivalent and subscribe to more expansive definitions of the Western Heartlands with the border line at Beregost, which roughly divides the Sword Coast up into Western Heartlands and Amn. One can also see the Coast as merging from Amn into Heartlands, or that the Heartlands stop at Baldur's Gate, etc. Finally, Amn and the Heartlands can be seen as being divided, with the Sword Coast in between as its own entity.

Categories on this wiki are currently arranged according to the latter viewpoint. There is no strict rule here, only an aesthetic rationale: it is convenient and practical for all of the areas in Baldur's Gate game to be considered part of the Sword Coast; for the Sword Coast to have its own town, Beregost; for the areas around Baldur's Gate City to be in Western Heartlands, and for Amn's borders to be on the same latitude as Nashkel.

Disc 1, the north part of Disc 2, Disc 4 and Baldur's Gate itself are both Sword Coast and Western Heartlands, Disc 3 is Amn. The rest (including Tales of the Sword Coast) are Sword Coast areas.

There are 54 mapped areas that can be traveled to above ground, these are all eventually unlocked on the World Map. There are also interiors of dungeons and buildings. Each one has an area code.

The following tables map the main area. They are positioned geographically. Two areas that came with the expansion Tales of the Sword Coast, namely Ulgoth's Beard and Durlag's Tower, though integrated in the map, don't fit into this array due to being added after the technical completion of the main game.

Paper map of the Sword Coast, included in some editions of the original Baldur's Gate

Paper map of Amn, included in some editions of the original Shadows of Amn

Another paper map of Amn, included in some editions of the original Shadows of Amn