The quest starts when entering the city from Wyrm's Crossing. If you tell the truth to the guard on the way in a Flaming Fist officer called Scar will ask to speak to Gorion's Ward, and hires the party to investigate the Seven Suns compound, located in the southwestern section of the city.

Entering the Seven Suns building, an unnamed merchant will approach the party and advise them to leave immediately just as he is doing, because the establishment has been overrun by "shapeshifters."

From here you have a choice on how to proceed: the lawful method, or the more rogue method.

Take this report to Scar in the nearby Flaming Fist Headquarters. He considers this serious news and will offer to pay double your previous wage if you return to the compound and destroy the infestation of monsters.

If you reject this offer, the quest will end here and you will receive:

If you accept his offer, you will instead receive double the experience points:

Head back to the Seven Suns and kill all of the Doppelgangers. The Doppelgangers stay disguised until you question them or simply attack them outright. There are two in the entrance room, two upstairs and one in the basement.

Jhasso is also in the basement. Some of the options convince him that you're there to help and allow him to leave, others make him stay and become unresponsive. Your dialogue with him is unimportant, but what does matter is whether or not he survives. Jhasso is not a Doppelganger and you will receive a better reward at the end if he lives, though oddly fewer XP.

Return to Scar to claim your reward[edit | edit source]

Return and tell Scar that you wiped them out to receive your final reward:

If Jhasso is still alive:

After speaking to the merchant, you can opt not to return to Scar and deal with the Doppelgangers immediately. Proceed with clearing out the building as described above. When you are finished, exit the building and you will be approached by Laola Axehand who will admonish you for acting without first consulting Scar.

Go speak to Scar in the Flaming Fist Headquarters and tell him everything that happened. He will not be too disappointed that you acted before consulting him, and will reward you accordingly:

If Jhasso is still alive:

To maximize your rewards on this quest, simply make sure all the Doppelgangers are dead and that Jhasso lives. If you do both of these things, whether you initially report to Scar or not you will receive the maximum possible reward. If you intend to save Jhasso, all reporting to Scar does is split the rewards he gives you between the two visits. 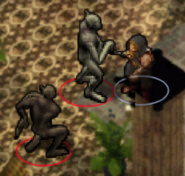 Enhanced Edition
Add a photo to this gallery
Retrieved from "https://baldursgate.fandom.com/wiki/The_Seven_Suns?oldid=168980"
Community content is available under CC-BY-SA unless otherwise noted.