South Baldur's Gate is one of nine districts of Baldur's Gate city. The harbor in the center separates the buildings into east and west, but the player can cross between without traveling to different districts.

The most important buildings in this section of the city are the headquarters of the Iron Throne in the northwest, the Water Queen's House in the southwest, the Harbor Master's Building in the center, the Low Lantern – a floating tavern – in the southeast and Jopalin's Tavern as the northernmost house in the row opposite the harbor offices.

The northern warehouse stores (3260.1150) an exotic and very much alive creature, involved in two quests. The creature was brought in by a group of adventurers with a questionable name we have met before.

The four Ogre Mages in what looks to be a restaurant (980.1300), are not noted as an assassination attempt by other walkthroughs, because they do not happen at a public location. Nonetheless, they follow the same pattern as all other assassins when the lead Ogre makes it clear that they are agents of the Iron Throne, intent on killing the Player Character specifically. They give 3,250 XP altogether, and have some high value random loot. It is wise to guard yourself against mind tricks, specifically Panic and Confusion. 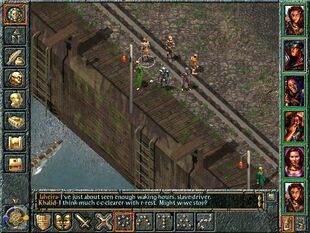 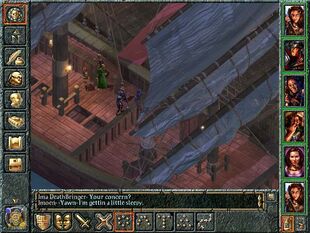 On the upper deck of the Low Lantern. – Another promotional screenshot
Add a photo to this gallery
Retrieved from "https://baldursgate.fandom.com/wiki/South_Baldur%27s_Gate?oldid=160959"
Community content is available under CC-BY-SA unless otherwise noted.