Sorcerous Sundries is a colorful circular building located in the district of East Baldur's Gate within the city of Baldur's Gate. Its primary function is the selling and buying of magical weapons and armor, projectiles and ammunition, spell scrolls, wands and potions. Non-magical weapons and armor, along with random miscellaneous items, will also be purchased for resale.

As soon as the party walks in the door, the owner, a mage named Halbazzer Drin, is observed standing behind the counter and Ordulinian is standing in front of it. Ordulinian will give you a quest should you speak with him.

On the second floor, a mage named Niemain is practicing a new spell and will attack, along with fellow mages Oulam, Wheber Ott and William Garst, if Gorion's Ward or any other member of the party annoys him.

Entering with Xzar in your party will cause Niemain to initiate unique dialog with you, mentioning that Xzar had made frequent reports about you and your activities fighting the Iron Throne. If you ask them who they are, Niemain will reveal himself to be Xzar's superior and a member of the Zhentarim. He will advise you to search the Iron Throne tower in the West of the city, as they are a mutual enemy.

The exchange is slightly different if Montaron is in your party, but Xzar is dead - he will point you towards the Iron Throne headquarters, but will not reveal any more information as he does not trust you and does not value Montaron as particularly capable without Xzar.

Either way, Niemain and his group will then leave without a fight.

During Chapter 7 which serves as the prologue for the Siege of Dragonspear campaign, Gorion's Ward is requested to fetch some items for Halbazzer as part of The Sorcerous Sundries Caper side quest.

On the second floor the party will interrupt a motley crew of thieves, led by a Drow named Sethyl, who are attempting to conduct a robbery.

This is a work in progress. Please excuse the mess while we fix things:
Several items are currently overstocked compared to what should be listed, some prices are missing and some icons may have to be changed.– User:Lytora 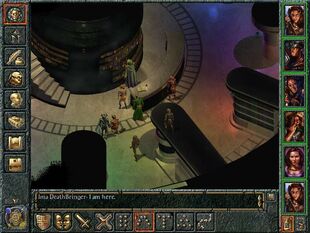 Interplay's promotional Ima DeathBringer and her party are amazed by the many magnificent shops in Baldur's Gate. – Promotional screenshot

Retrieved from "https://baldursgate.fandom.com/wiki/Sorcerous_Sundries?oldid=186243"
Community content is available under CC-BY-SA unless otherwise noted.