Not to be confused with Neira.

Neera is a chaotic neutral half-elf wild mage and a potential companion.

Neera is available to recruit from Chapter One on. She can be found in Beregost, south-east of the northern entrance, seeking aid against a group of mages hunting her, Neera barely gets to introduce herself before being confronted by the pursuing mages. Ekandor, the leader of the mages, demands your party step aside or be attacked. Regardless of your decision, Neera will force a battle in which she preemptively teleports Ekandor away using Wild Magic. After the ensuing battle with the remaining mages, Neera can be recruited.

If Edwin Odesseiron is in your party during the encounter, Edwin will recognize Ekandor as a fellow member of the Red Wizards of Thay and attempt to mediate with his colleague. After Neera's preemptive teleportation of Ekandor, Edwin pulls rank with the remaining mages since he is the ranking Red Wizard in Ekandor's absence. As a result, the henchmen disperse without a fight. Neera will then begin her usual dialog by asking to join the party, however Edwin will then threaten to leave since his own brethren are hunting her. Thus, the player must choose between keeping Edwin or recruiting Neera.

As a wild mage, Neera starts with Nahal's Reckless Dweomer, which allows the casters to choose any spell they know and cast it as a first level spell at the casting speed of 5, at the cost of a chance of having a Wild Surge, the casters get to add their experience levels to the wild surge roll.

At level 1, Neera has 4 hp and one Quarterstaff weapon proficiency, she is wearing a Traveller's Robe and wields Neera's Staff +1, she also carries a Gem Bag containing a Fire Agate Gem, Lynx Eye Gem, Sunstone Gem and a Turquoise Gem.

She knows the following spells at the time of joining:

Male protagonists of any race

The Call of the Wild Mage

Neera is available to recruit from Chapter 9. She's found in Bridgefort in Boareskyr Bridge, you must have retrieved the Wardstone from the ruined Temple of Bhaal in Forest of Wyrms in order to access the fort.

Male protagonists of any race

Neera is available to recruit from Chapter 2. After you hear three peasants talking about the shadow thief bodes in Bridge District street, travel a bit south, then back to the area entrance, there you witness Neera rescue a girl named Mereth from some Red Wizards of Thay (no comments from Edwin if he's in party). You'll encounter her again in your next travel, head to the Wild Forest to let her join.

Her starting proficiencies depend on Gorion's Ward's level at the time of recruitment: 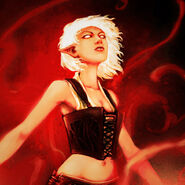 Add a photo to this gallery

Retrieved from "https://baldursgate.fandom.com/wiki/Neera?oldid=186264"
Community content is available under CC-BY-SA unless otherwise noted.