Nashkel Mines is an iron mine in Amn territory, just south-east of the aforementioned town of Nashkel. The area is largely wilderness, but has several features above ground including the mine entrance itself, which leads to four sub-levels and Mulahey's lair. 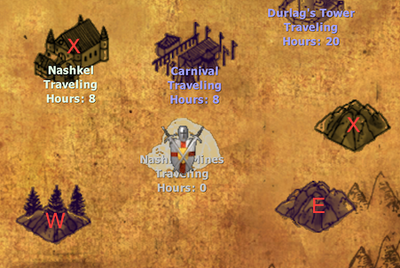 Talk to Emerson at coordinates 980, 1125. He will grant the group access to the mines. After this, talk to the Amnian soldiers guarding the mine entrance at 1200, 665, and two of the three guards will move into the mine, making way for the group of adventurers.

Kobolds can be found on all levels; additional enemies are listed by area.

When the party enters the underground part of mines for first time it will be greeted by Miner Gord which will give short summary of current situation and point to his friend Miner Ruffie for more details. Miners Lesley, Cory, Dilak and Bob on this level offer additional (non-essential) information about the mines.

Miner Dink at 1185, 1685 initiates the Kylee's Dagger side quest when he approaches the party, giving them a dagger belonging to Miner Kylee, who is on the next level down at 835, 2110.

Miner Beldin hurries toward the party just inside the entrance, running from Kobolds.

Lots of traps. With 15% in Find Traps, a thief will be able to find and disarm all of them. Send the thief, (probably Imoen) ahead and pull her back if she sees kobolds. A good place to have pathing configured to a high number of search nodes, as party members may wander off and set off traps

A couple of kobold commandos will appear. They have fire arrows in their inventory when they are killed.

Crossing the causeway to the rounded rock entrance leads you to Mulahey's room.

A Ghoul and a couple of Slimes guard the exit all the way around the lake to Area East of Carnival, also known as Valley of the Tombs, an area sixteen hours from the Mines map and Nashkel. This is hard to reconcile with the zero hours of travel from the Mines levels and the tunnel connecting them to this area.

In this new area, should the player choose to take the underground exit, there is an assassination party waiting, north of the exit from the Mines, that is very tough, but yields some nice rewards if defeated.

Retrieved from "https://baldursgate.fandom.com/wiki/Nashkel_Mines?oldid=190113"
Community content is available under CC-BY-SA unless otherwise noted.