Larswood has only two points of interest: the abandoned tower south and the druid shrine which is under construction in the northeast.

Other nearby areas include:

Some of this looks quite counter-intuitive on the World Map. The World Map was changed, particularly in this region, for BG:EE, but all this accomplished was to make a different set of transitions seem unlikely. 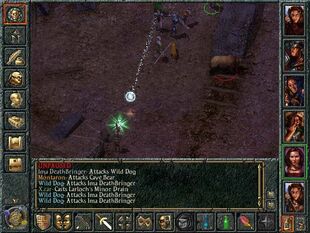 Interplay's promotional Ima DeathBringer and her party in an encounter with Druids. – Promotional screenshot
Add a photo to this gallery

Retrieved from "https://baldursgate.fandom.com/wiki/Larswood?oldid=160888"
Community content is available under CC-BY-SA unless otherwise noted.