Kobolds are small, reptilian humanoids that can be found in many areas of the Sword Coast and Amn, most notably near Nashkel and the Firewine Ruins. Though not usually dangerous on their own, they are always encountered in packs and can easily overwhelm low-level parties. They attack with short swords and shortbows, and their Commandos often use Arrows of Fire. They are often compared to dogs, and are distinguishable by their signature yipping sound.

In old Germanic folklore, kobolds were malicious mine spirits often blamed for toxic compounds found among ores. The element cobalt, first encountered as part of such compounds, was named after those spirits. The superstitions may have inspired the role kobolds play poisoning iron in the Nashkel Mines. 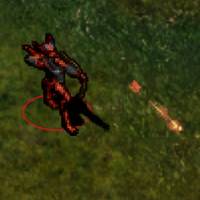 A Kobold Commando, shooting its Arrow of Fire.

Commando drops.
Add a photo to this gallery

Retrieved from "https://baldursgate.fandom.com/wiki/Kobold?oldid=182791"
Community content is available under CC-BY-SA unless otherwise noted.