Steps of the Library

GORION.cre
Gorion was a monk, a skilled spellcaster, a learned sage and a respected Harper. He lived in the library-fortress of Candlekeep during the times when he wasn't adventuring.

When you begin the game, you are told that Gorion is waiting to leave Candlekeep with you. You are instructed to gather some supplies and protection, then meet him at the steps of the Library.

Shortly after leaving you are ambushed (in a cutscene) by an "Armored Figure" that we later learn to be Sarevok, accompanied by Tamoko, two Ogres and two Thugs, one of which does some minor damage to you before Gorion tells you to run and hide while he attempts to fight them off. Gorion is murdered in front of your eyes, and so ends the Prologue.

You then begin Chapter One of the game.

Waiting for his step-child on the steps of the library. 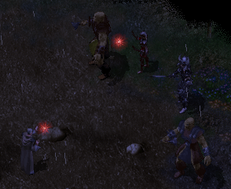 Gorion makes a last stand, killing both ogres and dealing 99 damage to Sarevok, before being struck down.

Community content is available under CC-BY-SA unless otherwise noted.
Advertisement