The area around the Friendly Arm inn is a walled keep with several homes and small farms in its courtyard, a temple, and a dominating, castle-like structure in the center – the inn. In Baldur's Gate, it is found along the Coast Way between the Gate and Beregost.

The Arm is neutral ground and, though unwritten, every guest must act with the utmost of civility to all other guests.[1][2] Its guards act independently from the Flaming Fist that's otherwise so present in most areas around – though the latter still might surpise parties with low reputation.

The iron crisis is an important topic among inhabitants and guests of the Arm, and many a rumor might be noteworthy for the interested listener. Stories from the goings-on in Nashkel reach the folks here too after the end of Chapter Two, and will, however, become their favorite topic then. Most commoners outside can be met all day and night, though some of them, especially females, aren't seen in the dark.

Besides being a central point on the northern part of the world map to meet people and companions, trade goods, find a temple's services or have a drink and rest at an inn – and all that in a relatively small place with only short or no ways inbetween –, the Friendly Arm Inn is also the first settlement Gorion's Ward might try to reach after leaving Candlekeep, being pointed to by Gorion before his death, and in search of two friends of his, Khalid and Jaheira.

When finally arriving at the Friendly Arm Inn after the events along the Candlekeep Coastway, Gorion's Ward updates the Important Events in the journal with relief:

Note: This entry is written the first time the Friendly Arm Inn is reached at any point of the story, regardless chapter and evolvement of the main quest line.

While outside the walls some hobgoblins beleaguer the road, the guards at the gate may inform the party about the Arms' "rules of conduct."[3][1][2]

Once inside and nearing the stairs to the inn, a mage approaches the party and gives a seemingly warm welcome – perhaps a bit too warm, though, and a bit too inquisitive. No matter the reaction or chosen dialog path, this encounter will end in another assassination attempt.

It may be noted that speaking with the two female commoners in the courtyard before this situation, might give a hint on what will happen, along with insights about other visitors of the inn. Those two are, however, only here during daytime and have a lot of other things to talk about as well.

All rumors about the troubles in the region or anything else that can be gathered by speaking with commoners here and inside the inn, and which are noted in Gorion's Ward's journal.

If the party's reputation is lower than three, they will be attacked by groups of the Flaming Fist, each consisting of three Flaming Fist Enforcers, a Flaming Fist Scout and a Flaming Fist Battle Wizard. This happens at the foot of the stairs to the inn and when approaching the main gate from either side, courtyard or outside the walls; it will not happen again until three days have passed.

The inn was once a keep used as the base of operations of an undead cleric of Bhaal, but the gnome adventurers Bentley Mirrorshade, his wife Gellana and their comrades raided the stronghold and destroyed the priest. Now, they have turned the keep into an inn, and an adjacent structure into the Temple of Wisdom, and run both themselves.[17] 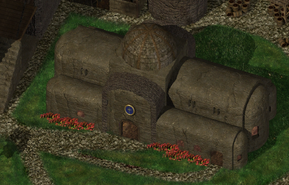 The Temple of Wisdom 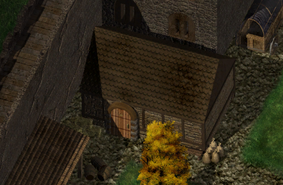 A generic home, with a generic commoner, and with safe-to-take-from furnishings 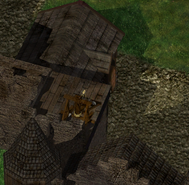 Joia's Home
Add a photo to this gallery 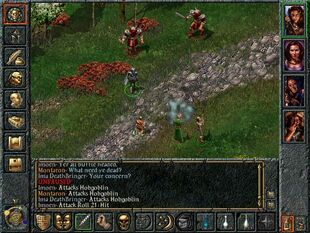 There are "hobgoblins within sight of this very Inn's walls" – Joia was right! – Promotional screenshot by Interplay
Add a photo to this gallery 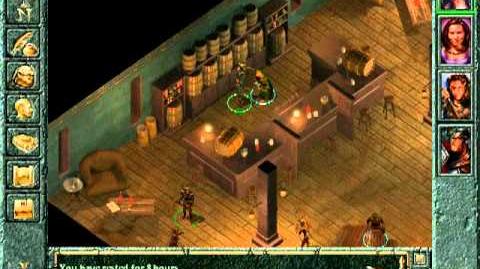 Retrieved from "https://baldursgate.fandom.com/wiki/Friendly_Arm_Inn?oldid=181548"
Community content is available under CC-BY-SA unless otherwise noted.