East Baldur's Gate is the area where you enter the city from Wyrm's Crossing and is one of nine districts of Baldur's Gate city. Welcome to the big city!

Once the party has gone to transition between an area and any other area adjacent to it, even if they do not actually visit it, they can thenceforth travel to that area once on the transition map; it takes 0 hours. As with other World Map transitions, the direction the party was traveling from affects which side of the map they enter a map.

The other split area is West Baldur's Gate; its western section, and the merchant there who buys Ankheg Shells, is only accessible from southwest and southeast Baldur's Gate. 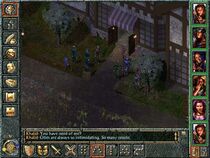 Interplay's promotional Ima DeathBringer and her party are looking for a place to rest – and find the Elfsong Tavern. – Promotional screenshot 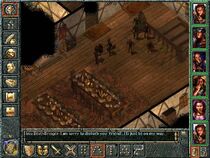 Inside, they meet someone by the name Cyrdemac. – Another promotional screenshot by Interplay 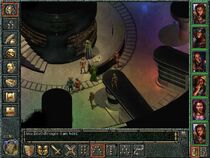 There are many magnificent shops in this town – Ima DeathBringer inside Sorcerous Sundries. – Promotional screenshot
Add a photo to this gallery
Retrieved from "https://baldursgate.fandom.com/wiki/East_Baldur%27s_Gate?oldid=160420"
Community content is available under CC-BY-SA unless otherwise noted.