Start a Wiki
watch 02:19
The Loop (Games)
Do you like this video?
Boo is Minsc's pet and companion. According to Minsc, Boo is actually a 'Miniature Giant Space Hamster' who is intelligent and can clearly communicate with him.

Boo appears in one of Minsc's quick item boxes, which is where potions and scrolls would go. If the player clicks on Boo, he will make a squeak and will run away as you try to get him while Minsc will give you a harsh glare.

Some of Minsc's dialogue includes Boo in it. Examples:

In Baldur's Gate II, Boo will squeak when Minsc says certain quotes. The hamster is often mentioned when Minsc is engaged in dialog. For example, Imoen has one banter in which she reveals that she would like to have a hamster for her own. And Jan Jansen will try to steal Boo several times, without success.

If the mod Unfinished Business for Baldur's Gate II is installed, the player will have access to the quest The Kidnapping of Boo, which centres around recovering Boo after he goes missing. 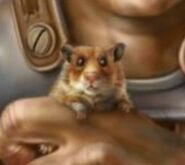 Retrieved from "https://baldursgate.fandom.com/wiki/Boo?oldid=168173"
Community content is available under CC-BY-SA unless otherwise noted.