A skull surrounded by teardrops.

Throne of Blood
Bhaal, also known as the Lord of Murder, is a lawful evil dead deity of murder.

The story of Bhaal's ascension is detailed in the History of the Dead Three. Bhaal was originally a mortal assassin who ascended to godhood with the aid of his companions Bane and Myrkul. They traveled the realms seeking power and eventually killed one of the Seven Lost Gods whose power they divided amongst themselves. Then they went at last to the Gray Wastes of Hades, where Jergal dwelt, intent on taking his power by force but he surrendered it willingly.

The three then fought over his power until Jergal suggested they divide it up and decide who got what with a game of skill. Bane won and, having first choice, took the portfolio of fear, hatred, strife and tyranny. Myrkul was second, and chose the portfolio of the dead. Bhaal came out the loser of their game, and was left the realm of murder as his own, but Bhaal found it suited him well, and thought it the best of the three.

During the Time of Troubles, most gods, including Bhaal, were forced to walk upon the face of Faerûn as mortals, and lost all their godly powers. During this period, Bhaal was slain by the then-mortal Cyric with the 'sword' Godsbane atop Boareskyr Bridge. Bhaal, having foreseen his own death, had impregnated countles mortal women, whose children carried a piece of his divine essence within them. These children are referred to as the children of Bhaal, or Bhaalspawn, and were created to ensure Bhaal's resurrection. To this end, Bhaal sought to have all his children slain after his demise so his essence could be freed and gather at the Mana Forge. Once all the pieces of his divine essence had been collected, he left it to his most trusted deathstalker, Amelyssan, to perform the correct rites to bring about his resurrection and help him regain his power.

Bhaal is mentioned on a multitude of occasions throughout the entirety of the series. His unholy symbol, the skull surrounded by a ring of tear drops, is the logo of the first Baldur's Gate, it's Enhanced Edition and Throne of Bhaal. The latter one even has his name in the title. The entire story revolves around his legacy in form of his countless children, the Bhaalspawn, most notably Gorion's Ward, Sarevok, Imoen and The Five.

At the end of Chapter Nine, Gorion's Ward has a vision of Cyric murdering Bhaal with Godsbane, when they cross Boareskyr Bridge.

During a dream sequence in Baldur's Gate II Chapter 4 he appears in the form of "the instinct" (using Sarevok's character model from the first game). The player has to lure him into the library where the dream version of Imoen will make him vulnerable, so that they can strike him down with combined forces. The dream ends after he is defeated.

Shortly after that, Gorion's Ward will gain the ability to transform into one of Bhaal's avatars, the Slayer.

In the very finale of the series, in Baldur's Gate II Chapter 10, Gorion's Ward either destroys or absorbs of what ever is left of Bhaal's essence in the world and even gets the option to take his place as the new Lord of Murder.

Unlike most other temples in the games, the temples of Bhaal do not offer any services. 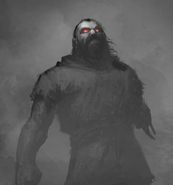 Bhaal, about to be slain by Cyric 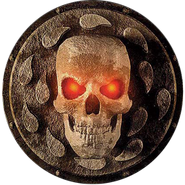 Bhaal's symbol as the logo of the first Baldur's Gate

Bhaal's symbol on the floor of his temple underneath Baldur's Gate

Bhaal's symbol on the floor of his temple underneath Baldur's Gate 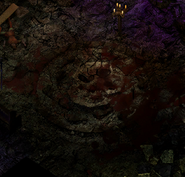 Retrieved from "https://baldursgate.fandom.com/wiki/Bhaal?oldid=154701"
Community content is available under CC-BY-SA unless otherwise noted.