Preliminary note: If not mentioned explicitly otherwise, the topic of any wiki article referring to this page by stating "(appears) in Baldur's Gate" still is present in its expansion Tales of the Sword Coast and is also part of the Enhanced Edition.

The story follows the player character's journey along the

Sword Coast, which lies on the west coast of the continent Faerûn, as he or she grows up following the cataclysmic Time of Troubles. Character development occurs through g and battle. The game rewards the player character according to his or her moral choices.

The game was programmed within the licensed ruleset of the Forgotten Realms role-playing setting, using the Advanced Dungeons & Dragons 2nd edition rules, though various elements from the ruleset were modified to allow the game to be executed in real-time. Each character is in constant action, while the game can be paused at any time.

During the game, past and present events are related to the player through dialog, written text, journal entries, or cut scenes. Dialog is initiated when the player clicks on bystanders. This generates written and sometimes spoken dialog with selectable responses. Such interactions can lead to quests or missions.

The game is separated into seven chapters intercut with interludes of spoken dialog. Free exploration of the world map is allowed in every chapter, though some areas are not unlocked until the player character advances to a certain point in the game. The player begins as a weak character, poorly equipped and without allies. As players progress they discover new and more powerful weapons, armor, and spells, and can form a party of up to six characters (including the player character). Experience points gained through completing quests and killing monsters improve the abilities of the main character and other party members.

The flow of time during the game is expressed by changes in lighting and by the closure of most shops and the increased likelihood of encounters during the night. Taverns are open during the night, but there are no changes in the presence of customers or the barkeeper to reflect the flow of time. The troupe of characters controlled by the player do become fatigued after traveling for a full day, which requires rest to recover.

The western shore of Faerûn along the Sea of Swords contains a multitude of ecologies and terrain including mountains, forests, swamps, marshes, plains, cities, and ruins. Collectively called the Sword Coast, it attracts adventurers for good and evil alike, and provides the backdrop for this grand adventure. The region encompassed by the game is roughly bordered to the South by the Cloud Peaks, the East by the Wood of Sharp Teeth, the West by the Sea of Swords, and the North by Baldur's Gate (the largest and most affluent city in the region). The characters travel the countryside, exploring the various areas such as towns, dungeons, mines, forests, castle ruins, and the city of Baldur's Gate. The main story involves the characters investigating a conspiracy, confronting the clandestine plots of organizations like the Zhentarim, Red Wizards of Thay, the Iron Throne, Flaming Fist, The Chill, The Blacktalons, and the Harpers, as well as finding out the main character's own ancestry and history.

The player character and their friend Imoen have grown up together since childhood under the tutelage of their guardian, the mage Gorion. As orphans, they were raised in Candlekeep, an ancient fortress-turned-library in the rural Sword Coast region, which lies south of the city of Baldur's Gate. However, strange things are afoot on the Sword Coast: iron production has virtually halted, metal already produced quickly crumbles, and bandits scour the countryside hunting iron over any other treasure. Strangest of all, even inside the secure walls of Candlekeep there are mercenaries with designs on the main character's life. Gorion knows what is going on but will not tell the player character, and instead decides to leave Candlekeep and journey with the player character to a hiding place. However, the night after leaving Candlekeep they are ambushed by a group of bandits led by a mysterious "armored figure". When Gorion refuses to hand over the player character, he is attacked by the bandits; Gorion defeats them but dies in doing so. The player character soon runs into Imoen, who had been following in secret after reading a note about the journey on Gorion's desk. She too saw Gorion's murder, and now insists on accompanying the character.

The nearest cities are closed to the player: Candlekeep demands a unique, valuable book as its admission fee, and the city of Baldur's Gate is closed off to outsiders for fear of the bandit hordes. Seeking safety, the player character teams up with other adventurers, and soon he or she sets out to find the cause of the iron shortage by traveling to the source of the iron, the mines of Nashkel, and in doing so begins to unearth a deeper conspiracy. Kobolds have been contaminating the iron in the mine, and documents at the Nashkel mine connect the mine operation with the iron-hunting bandits, and ultimately lead the main character to the secret campsite of the bandits. They appear to be mobilized mercenary companies employed by the Iron Throne, a mysterious organization which is aggressively expanding its influence. The Iron Throne intends to gain control of the Sword Coast by diverting the iron supply to its own armies exclusively, and stockpiling all plundered iron at the only working iron mine in the region, deep in the Cloakwood forest. As the main character sabotages the mercenary installation in the Cloakwood mines, the pressure on Baldur's Gate is relieved enough for the city to be re-opened to outsiders, and the player character can confront the local Iron Throne leaders at their headquarters.

Seeking to confront Sarevok, the characters find out that he is actually half-brother to the main character, both of whom are children of the dead Lord of Murder, Bhaal. The main character's Bhaalspawn ancestry explains much about their past and raises questions about their future. Sarevok's plans turn out be much more sinister, as the Iron Throne is just a façade for his real intentions. Through manipulation of politics and resources Sarevok plans to start a war of sacrifice between Baldur's Gate and the kingdom of Amn to the south, causing enough carnage to become the new Lord of Murder. In the end the player character defeats their brother Sarevok and sends his tainted soul back to Bhaal. 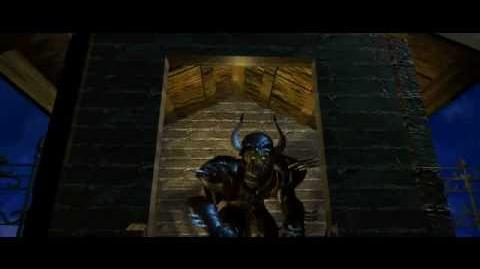 Baldur's Gate - Introduction (English)
Add a photo to this gallery

Retrieved from "https://baldursgate.fandom.com/wiki/Baldur%27s_Gate_(game)?oldid=184517"
Community content is available under CC-BY-SA unless otherwise noted.