A creature's Armor Class, or AC, represents its ability to dodge, block or parry physical blows without getting hurt. It stands opposite to an attacker's THAC0 — which describes the accuracy of a creature's physical attacks.

Note: Item and spell descriptions will list AC bonuses as positive values, but they are properly counted as negative, as can be seen in the Inventory screen. When it comes to descriptions, it's simpler to focus on the word bonus or penalty rather than the sign.

An attacker is able to perform up to 10 Attacks per round. For each attack, they roll a 20-sided die whose result will support their THAC0 in trying to overcome the defender's Armor Class, so that they can land a blow. Regardless of AC and THAC0, rolling a 1 always translates to a miss, and rolling a 20 always translates to a Critical hit. A roll that is neither a critical hit or miss will result in a miss if AC is good enough — low enough — to validate this inequation:

How Armor Class is calculated[]

The various ways to alter AC can be sorted in four categories:

Each element from the AC formula is described below. The game interface will display most of them in both the Inventory screen's top-right corner and the Record screen's Combat Stats tab. The “Appears as” cells in the table below describe how the game interface names the various elements.

Altering the THAC0 of incoming attacks[]

In four cases, a characteristic of the defender will affect the THAC0 of incoming attacks. Of those, only the Blindness penalty will be displayed in the Inventory screen's AC section and the Record screen's Combat Stats tab.

Minor note: All four modifiers will be included in the second value of the Combat log's attack report.

Rundown of a large Armor Class[] 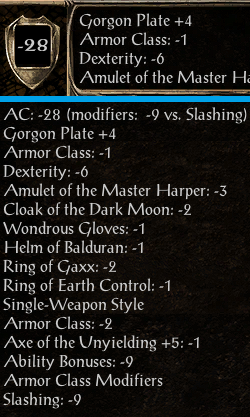 Final AC vs Slashing could be further improved against all Slashing attacks coming from Evil-aligned creatures that cannot see the invisible: Should the Fighter / Thief use Improved Invisibility from the Improved Cloak of Protection and double down with Protection From Evil, they would have the equivalent of an AC of -43.

In practical terms though, a defender's AC only needs to be 20 points below their attacker's THAC0 to ensure that only Critical hits will ever connect.

There are approaches other than Armor Class to be protected against physical attacks: Reflected Image and Mirror Image will absorb one/some hits, Stoneskin and Iron Skins will absorb only the physical damage of some hits, mantles will make you immune to non magical weapons (Protection From Normal Weapons; Aura of Flaming Death) magical weapons (Protection From Magical Weapons); weapons with an enchantment level inferior to 3 (Mantle); 4 (Improved Mantle); 6 (Absolute Immunity).

Some effects affecting the defender will essentially disable their AC, allowing the attacker to hit without an attack roll: Time Stop, Hold, Sleep, Stun, ... See the Helpless article for more information.

Shields offer a +1 or greater bonus. They are numerous and haven't been listed.

The following equipment offers AC bonuses that can improve a creature's base AC. Items marked as restricted cannot be worn together or with most magical armors. See the section Item restrictions for more details.

Ideally, we want to stack AC bonuses from as many items as possible, but in reality many of the items may not be worn together.  Based on ITEMEXCL.2da, you cannot combine any of the items from the following sections.

Due to inconsistency in how AC changes are described in-game, BGW will unify the format by writing -n bonus and +n penalty for modifiers, and list the exact subdivided AC values (vs. slashing, crushing, piercing and missile) instead of their modifiers.

Have an Armor Class of -15 or lower during Baldur's Gate II: Enhanced Edition.