The Area South of Lighthouse, also known as the Archaeological Site, is where Captain Brage, and Charleston Nib's archaeological site can be found. 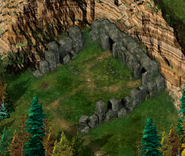 Though not technically a quest, as it lacks appropriate entry in journal, the events at the archaeology site function much like one. They begin when Gorion's Ward and their party speak to Charleston Nib. After asking about your business there, Charleston asks you to assist him in protecting the site. You can push him into paying 100

When he has gone, Gallor will approach you and suggest an alternative use of your skills. He wants you to kill Charleston and his workmen so he can sell the artifacts from the excavation site. If you prefer his proposal, you should ensure you ask for a reward before agreeing. He will offer 900

Whichever moral path you choose, you must talk to Charleston again outside the tomb for events to progress. You will be taken inside the tomb and, shortly after, the workers will go mad and attack. There is no other course but to kill them. Once they are dead, speak to Charleston again. You can raid the sarcophagus for the Idol of Kozah. If you're playing the original Baldur's Gate, you must do this after talking to Charleston or he'll take the idol from you. In the Enhanced Edition, however, he won't.

If you are helping Charleston, you can leave after the workers are dead and you have spoken with him again. Helping Charleston yields a reward of +1 Reputation, 1000 XP and 0, 50 or 100

depending on your dialogue choices. Gallor can be talked to afterwards, causing him to leave or safely killed for 120 XP and minor loot.

If you are working for Gallor, kill Charleston. This will cause a serious Reputation decrease, unless you charm him in order for diggers (or your summoned creatures) to do the dirty work. When you leave the tomb with the idol, a Doomsayer will try to approach you. If you are quick enough to give idol to Gallor (you can also drop the idol on ground temporarily), you will get a reward of 900

and -2 reputation. Otherwise, Gallor and Doomslayer will turn hostile. Defensive spells and summoned creatures can help. Killing the Doomsayer will also get you 4000 XP.

If you have no interest in either helping Gallor or Charleston, you can take the Idol of Kozah to the ghost of Ulcaster at the Ulcaster Ruins along with the ancient armor from the Firewine Ruins. This will earn you the dubious reward of the cursed sword The Vampire's Revenge. Also note that it is possible to agree to help Gallor but not kill Charleston. In that case, if you have the idol when exiting the tomb, Gallor will turn hostile and attack.

Captain Brage is in the central-southeastern part of the map, very near to the archaeological site and a caravan of slain innocents. He is the target of the quest The Tale of Captain Brage, called 'Recovering Captain Brage' in classic Baldur's Gate. Brage is in possession of the Cursed Sword of Berserking +3, which caused him to murder many people, including his own family. If you answer his riddle correctly, he will surrender and give you the sword. You can also choose to kill him and take his sword. The body can be brought to Oublek in Nashkel for a bounty.

Ba'ruk is a hobgoblin wandering the area. Ba'ruk will greet the party and demand that they leave 'his' land. Whatever you say, he will attack with some kobold commandos. Killing Ba'ruk gives you 165 XP, a Bastard Sword, Composite Long Bow, Arrow x20, Helmet, Leather Armor, random treasure, 5

as well as loot from kobold commandos, most notably the Arrows of Fire if you can kill them quick enough (it is possible for them to instantly switch to their melee weapon if you manage to get to their spawn location before the dialogue begins).

On the original World Map, these travel times are entirely believable, but on the revised map for the Enhanced Edition it appears to be quite impossible that travel to the Red Canyons area could be faster than to the Fisherman's Lake area.

Retrieved from "https://baldursgate.fandom.com/wiki/Archaeological_Site?oldid=185917"
Community content is available under CC-BY-SA unless otherwise noted.