DRAGBLUE.cre
Abazigal is a lawful evil chromatic blue dragon Bhaalspawn and he is also a member of the The Five, whose goal it is to destroy their kin. He has the ability to take the form of a blue skinned human. Abazigal has a son, Draconis, who is also a Bhaalspawn himself, but he is a green scaled dragon. Abazigal is leading an army of half-wyverns and dragons. He can be found in his lair. He is always immune to the effects of Hold Person, Web, stun, poison, slay, Sleep, charm, Slow, Grease, entangle, silence, berserk and panic, and he is completely immune to electrical damage and has 65% magic resistance. In his dragon form he is also immune to Time Stop.

He is wielding Gram the Sword of Grief, which is a +5 two handed sword. With his 25 Strength and the sword, he can easily deal 20-30 points of damage while in human form.

In his human form, Abazigal likes to use Whirlwind to shred his opponents in seconds. However, this can be his downfall as well.  Have one or two party members (ideally, use their clones) activate both Fire Shield (Red) and Fire Shield (Blue) and engage Abazigal in melee, and he will rapidly kill his human form on Fire Shields.

To help them survive, they need to use Protection From Magical Weapons (which is good enough to make them invulnerable for up to 4 rounds), or Stoneskin + Protection From Lightning (or such protection from gear) + some protection from poison, or whatever combination makes you feel comfortable.  Before walking up to talk to Abazigal, they should cast Spell Immunity : Abjuration to prevent these spell effects from getting dispelled.

Here is a screenshot showing Sarevok's clones engaging Abazigal after the opening dialogue is over (Note: Sarevok's clones have slain all the salamanders and are taking the form of Greater Werewolf for the effect of regenerating 8 HPs per sec).  Sarevok can't really hurt Agazial this way.  However, his clones are not meant to deal hits. They are meant to take hits.  Each time Abazigal scores a hit within a short distance (5 feet) from them, he takes an average of 6.5 fire + 6.5 cold = 13 damage.  If he enables Whirlwind and scores 10 hits in one round, he will take an average of 13 * 10 =  130 damage. The faster he attacks, the faster he kills his human form.

The best thing about the Fire Shield tactic is that all you really need are just a few low to mid-level wizard spells. The setup is simple,  A bard can do it. A high-level thief may do it with scrolls too.

Additionally, all priest class characters (cleric, druid, shaman, monk) may use their own versions of Fire Shield (such as Aura of Flaming Death ) to achieve the same result.  If they do it, the only major issue is: without Protection From Magical Weapons , how to get them survive Abazigal's attacks plus the potential extra damage when Abazigal transforms into a dragon.

It's better to use clones. They can do a simple suicide attack to quickly end this phase of the battle.

The above Fire Shield tactic does not work on Abazigal after he transforms into a dragon. The fastest way to kill Abazigal in his dragon form is to completely ignore all of his attacks while rapidly dealing a great deal of damage that bypasses all of his defences.

How to do that? If you have Neera in your party, you can do that without preparing in advance.

Here is a screenshot showing Neera finishing off Abazigal with three casts of Dragon's Breath . It showed one of the fire damages, which is 113.

The combat sequence is:

Due to Dragon's Breath's hefty damage (up to 200 fire per hit), which bypasses Magic Resistance, Abazigal will die after being hit by an average of two successful casts of this spell.  Note: Neera can cast this spell multiple times non-stop (no casting delay), if using her level 1 spell slot.

The best thing about the Neera + Dragon's Breath tactic is that you don't need special preparation in advance. Additionally, there is no messy fight and every party member is happy and healthy.

Of course, other mages can do the same, except that they typically have to prepare their spell slots in advance, which typically requires a certain degree of metagaming (namely, knowing how the battle will unfold before it starts).

Make sure you kill as many as possible Ice Salamanders before confronting Abazigal, who will start a short conversation before fighting and make sure all party member are under effect of Remove Fear. He will start the battle and then he will use the ability Hardiness, which gives him 40% resistance to any physical attack. Let one party member tank him and try to take 290 hit points without using powerful spells&abilities which are needed when he takes his dragon form. He may also use the abilities Kai and Whirlwind Attack and the 3 Potions of Superior Healing which he can use.

Now he has taken his dragon form and while doing so, he will push away every one around him at the time (Note: unlike in the case of Draconis, the game does not automatically put all summoned, gated and cloned creatures in your party to death) using his abilities such as Dragon Fear, Wing Buffet and will do physical attacks with his claws, which also inflict electrical damage. Now he has a basic resistance to all physical damage and the effect of Hardiness should not be active by now. If there are not enough ice salamanders dead, you probably will get in trouble now for not doing so.

On up to Insane difficulty, two such swords if hasted can kill all the salamanders in the whole area, before you walk up to talk to Abazigal.  After the fight starts, they are also able to keep Abazigal occupied while the party deals with the salamanders, if not dealt with already.

If you have a druid (Cernd or Jaheira ) or a Shaman, you may use Creeping Doom and/or Insect Plague to stop Abagzigal from using spells.  As long as one of these Druidic spells successfully hits Abazigal, he will not be able to hurt those floating swords in any way for the duration of the spell.  Note: these spells stack on themselves.  Also note: In order for these spells to successfully hit him after he transforms into a dragon, you must first lower or remove his Magic Resistance.

Jaheira, Haer'Dalis or another character with access to Use Any Item can effectively tank Abazigal and take minimum damage. Here's how to do it:

Note: Jaheira is unable to prevent her Iron Skin from getting dispelled.  In the Enhanced Editions, Iron Skin becomes one of the slowest spells and Hardness ceases to stack on itself. As a result, it is now nearly impossible for Jaheira to recast Iron Skin while under attack. Due to his high APR, Abazigal can remove Iron Skin quickly.  Once Iron Skin is gone, Hardness + Armor of Faith won't be enough to prevent her from taking damage fast.  In the Enhanced Editions, on a harder difficulty setting, Jaheira is not nearly a best tank for Abazigal.  In a non-EE game, she is different. 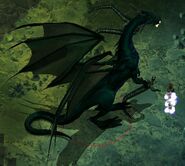 Dragon, in-game
Add a photo to this gallery

Retrieved from "https://baldursgate.fandom.com/wiki/Abazigal?oldid=190943"
Community content is available under CC-BY-SA unless otherwise noted.